This is TAKA, a TESEN staff member.

It was about 10 years ago when I first encountered a share house. When I was on a working holiday in Australia. Following the last two articles, we’ll be taking a look inside a share house.

I’ve had many people reminisce about their own experiences and say, “Oh, I know, I’ve been there. There were also those who were able to use this as a reference when moving into a share house for the first time, saying, “Wow, I didn’t know that was possible.

If you have a minute to spare while boiling water in the kettle or downloading an app on your smartphone, please take a look.

After the morning tour with Antonio (my Spanish friend), we were finally in the second half of the tour.

From noon, Spana (a Thai friend) was going to introduce us to a share house, so we met up with her in front of the tower building again.

This is the basic pattern for share houses in the Sydney metropolitan area.

As soon as they saw me, they started asking me questions.

They came over to talk to me, and he was so friendly!
As we were talking, a wrench broke the conversation and we toured the room and the water area. (It was so fun…)
The rooms and bathrooms are not particularly different from the share house we saw in the morning.
No problems with house rules or contract conditions either!

Then, back in the living room, the two guys from earlier were talking to me again.
We talked about each other’s families and countries, and finally they asked, “So, when are you moving in? Let’s have a drink together next time!

The owner of the share house we visited in the morning gave us some advice on finding a place to live: “At the end of the day, it’s all about first inspiration! The reason for my decision was, of course, the two tenants.

The reason for my decision was of course the two tenants.

I had a hunch that I could have a fun life here, and I wanted to talk and play with them more!
They also said they were fluent in English and would teach me how to study English! That’s great!
↑At that time, I felt that a share house is decided by its residents, so TESEN share houses are designed

with a flow line that makes it easy for residents to communicate with each other.

Right away, we made the initial payment and secured our room!

Now I just have to get ready to move in… 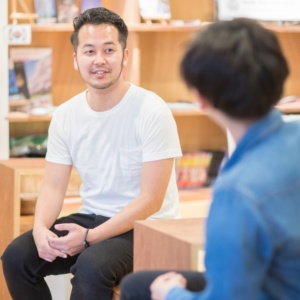 Next time: Preparing to move into a share house for the first time.