People choose to live in a share house when relocating or changing jobs!

Hello, I am staff TAKUYA.

We always ask those who visit our share houses, “Why did you decide to live in a share house? I’m sure many of you have experienced this at least once in your life.

Whether it’s for higher education, a new job, a transfer, or a new job, there are many reasons. The reasons for moving to a share house also vary widely.

Among these, the key words we often hear are “transfer” and “job change. Based on episodes from actual residents, we’d like to tell you what kind of life awaits you in a share house when changing jobs, and why we recommend living in a share house!

So let’s get started! 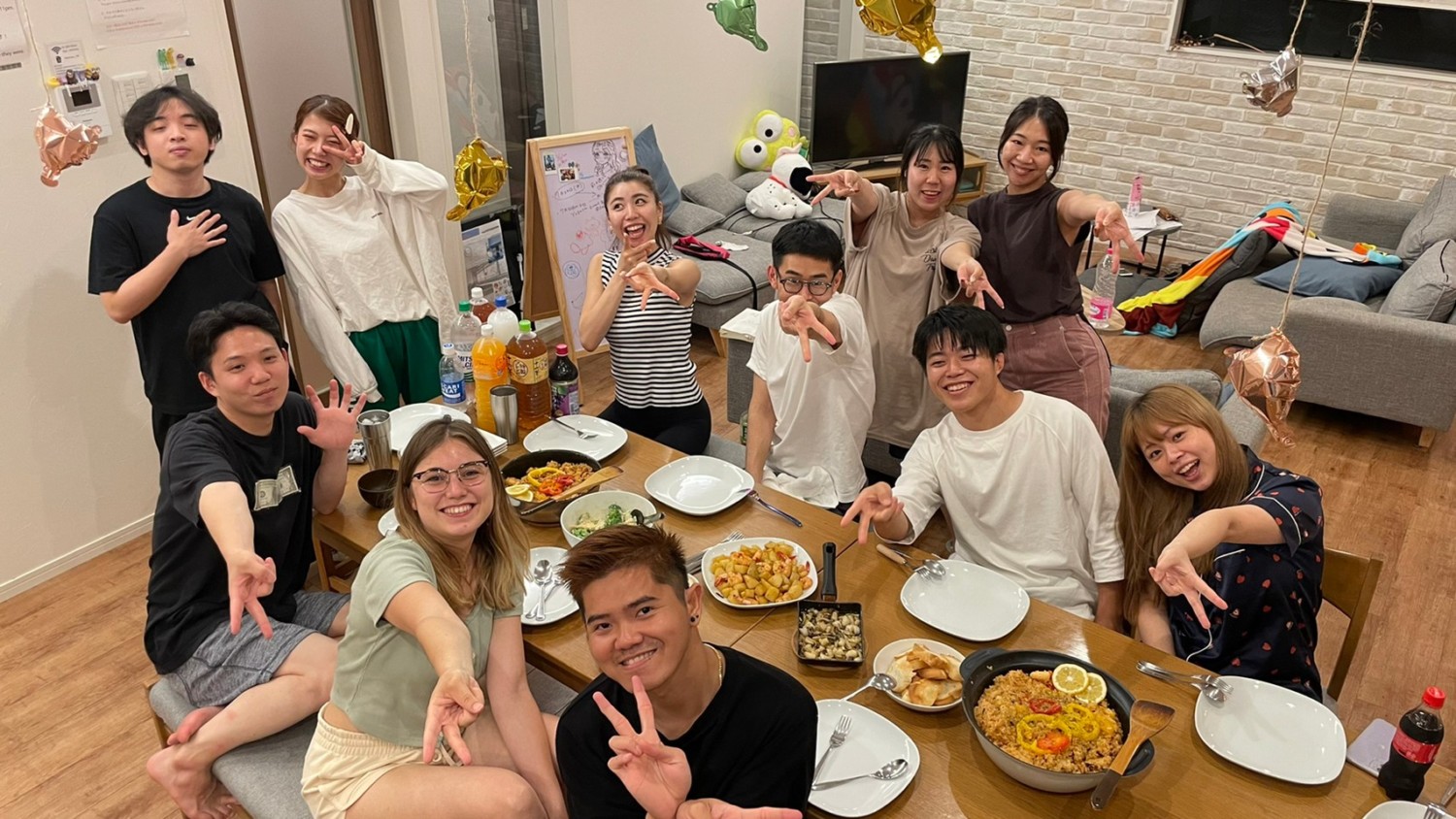 1. What is everyone’s problem when transferring or changing jobs?
2. What is the difference between a share house and a studio?

3. Episodes of people who have moved into a share house!

1. What is everyone’s problem when transferring or changing jobs?

The number one problem that everyone faces when transferring or changing jobs is, without a doubt, “Finding a place to live”. It seems that many transfers and job changes are accompanied by moving. Since this will be the house you will live in, you want to make sure you are satisfied with your choice.

However, when everyone is in a flurry of activity, people tend to put it off until later. In the case of job transfers, it can be difficult to take the time to go look at houses because of sudden company orders.

In addition, we often hear comments like the following.

・I have been there before on vacation, but I don’t know the area at all.

・I don’t have any acquaintances, so I’m worried about making friends.

・It will take me a long time to get used to a new environment (work, land).

・It’s my first time moving and I need to get all my furniture and appliances from scratch.

I’m sure many of you have had similar experiences. When I hear things like this, I think about how difficult it can be to relocate or change jobs, but as a share house management staff member, I hope to be able to help you “find a place to live” so that you can get your new life off to the best possible start!

2. From tour to move-in! What is the difference between a share house and a studio?

I think the rough flow of moving into a share house or a studio room is something like this. I think the major differences here are (2)Property tour and (5)Contract / Move-in.

The first step is to visit the property.

In the case of a studio apartment, the tour generally involves going to the property and actually seeing the room. Since you can actually see the room, you can get a sense of the size of the room and get an idea of how you would like to live in the room.

On the other hand, many share houses offer online tours in addition to on-site tours, since tenants come from all over the world and there are also inquiries from distant places, such as from people who are relocating or changing jobs.

Since the tour is conducted online, the major advantage is that you do not have to actually visit the site. It is also great for those who live far away to save on transportation costs to the site and not have to travel for a long time.

Next, there is the contract/occupancy.

The major difference between a studio and a share house is the length of the contract. Generally, studio apartments are contracted for a long period of time, such as a two-year contract.

On the other hand, share houses are preferred by people changing jobs or relocating because they can be used for a short period of time, such as a minimum tenancy of a few months. You never know what it is like to live in a new city until you actually live there.

People who are not sure if they will be able to live in a share house for a long period of time may not be interested in a long-term contract. Because of this, share houses that allow short term stays are very popular.

3. Episodes of people who have moved into a share house!

There are quite a few people who choose to live in a TESEN share house when they move or change jobs. Here are some episodes from actual residents.

She moved to Osaka when she changed jobs. This was the first time for her to move out of her parents’ house, so she decided to try living in a share house where she could meet a lot of people. However, she had only been to Osaka a few times on vacation, had no friends, and did not know the area at all. She was a little apprehensive, but it was the residents who approached me when She visited the share house that convinced her to move in. Many of them were in the same situation, and after hearing their stories, she felt at ease.

He returned to his parents’ home in Osaka for the first time in about 6 years after being transferred from Tokyo to Osaka. Since he work remotely most of the week, after two months back at his parents’ house, He was tired of repeating the same days. Since He was transferred to Osaka for a limited period of time, He could not sign a contract for a studio room, and all his furniture and appliances were disposed of when he moved out, so he chose a shared house where he could sign a short-term contract and move in with only one suitcase.

Furthermore, there were also comments from those who have moved in like this!

・The first day I moved in, they showed me around the share house and even took me supermarket shopping.

・I was worried about my new job and new lifestyle, but the residents helped me out with advice.

・I made friends right away after entering the share house. We now go on trips together!

・When I come home from work, there I am, waiting to say, “Welcome home!”

From what we’ve heard, a share house may be the perfect place for those making a fresh start after a transfer or job change!

All of TESEN’s share houses are newly built and designed exclusively for share houses, filled with ideas from people with experience in share houses. Each share house has its own concept, so each property has a different atmosphere. 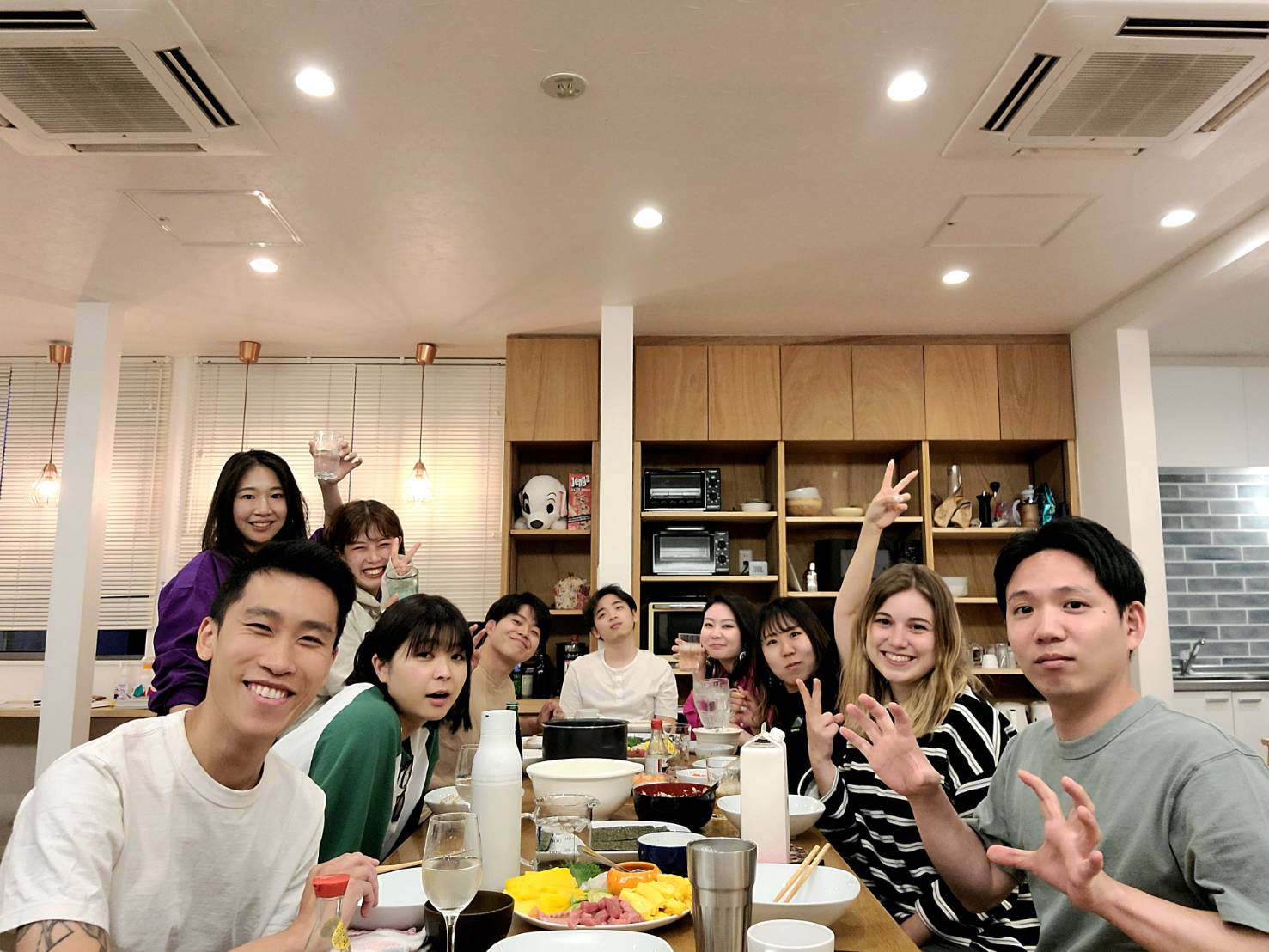 SEN OSAKA has many foreign residents and many different languages are spoken here, so even if you are new to Osaka due to a job transfer or change of occupation, you can make friends right away! 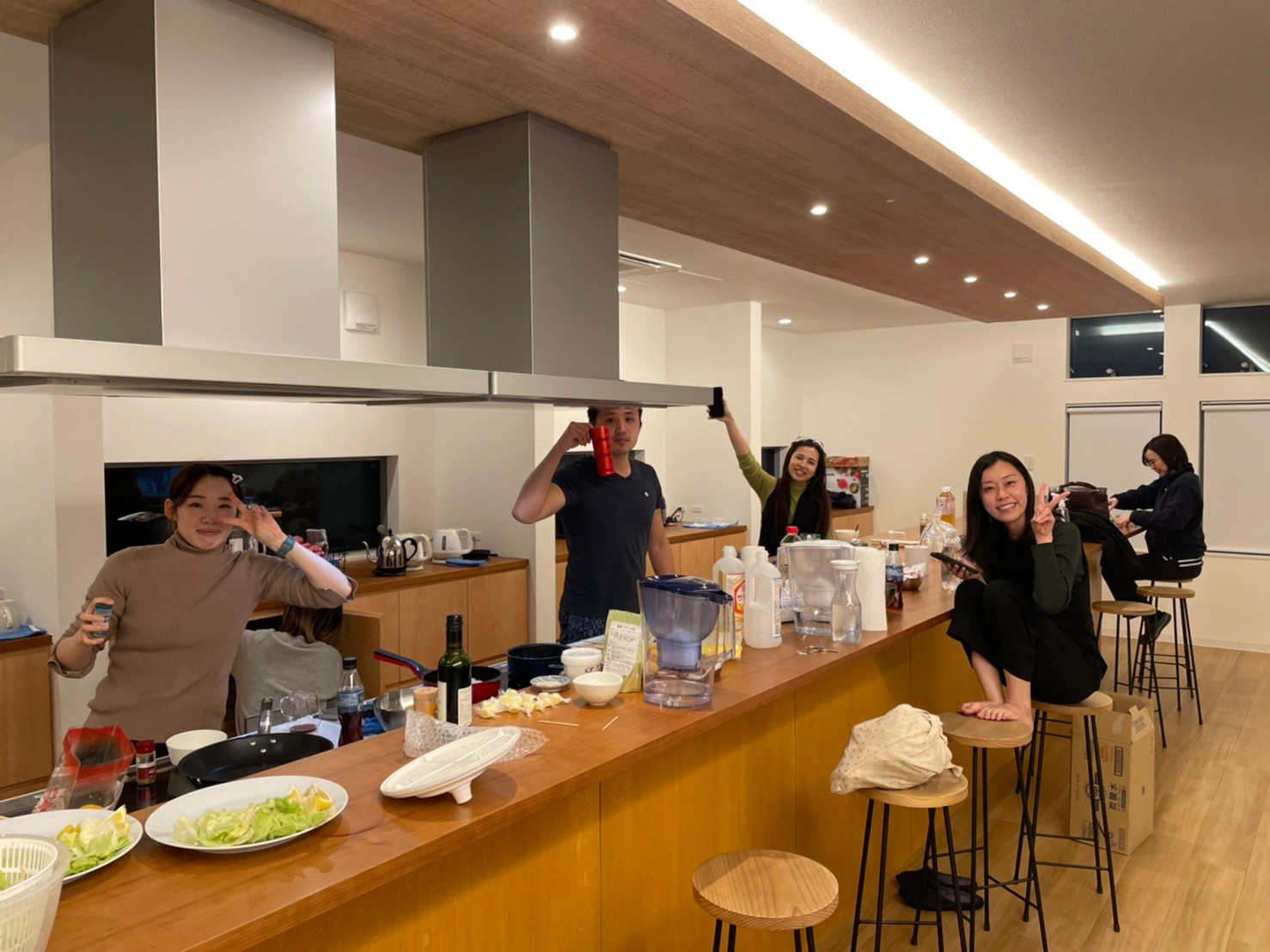 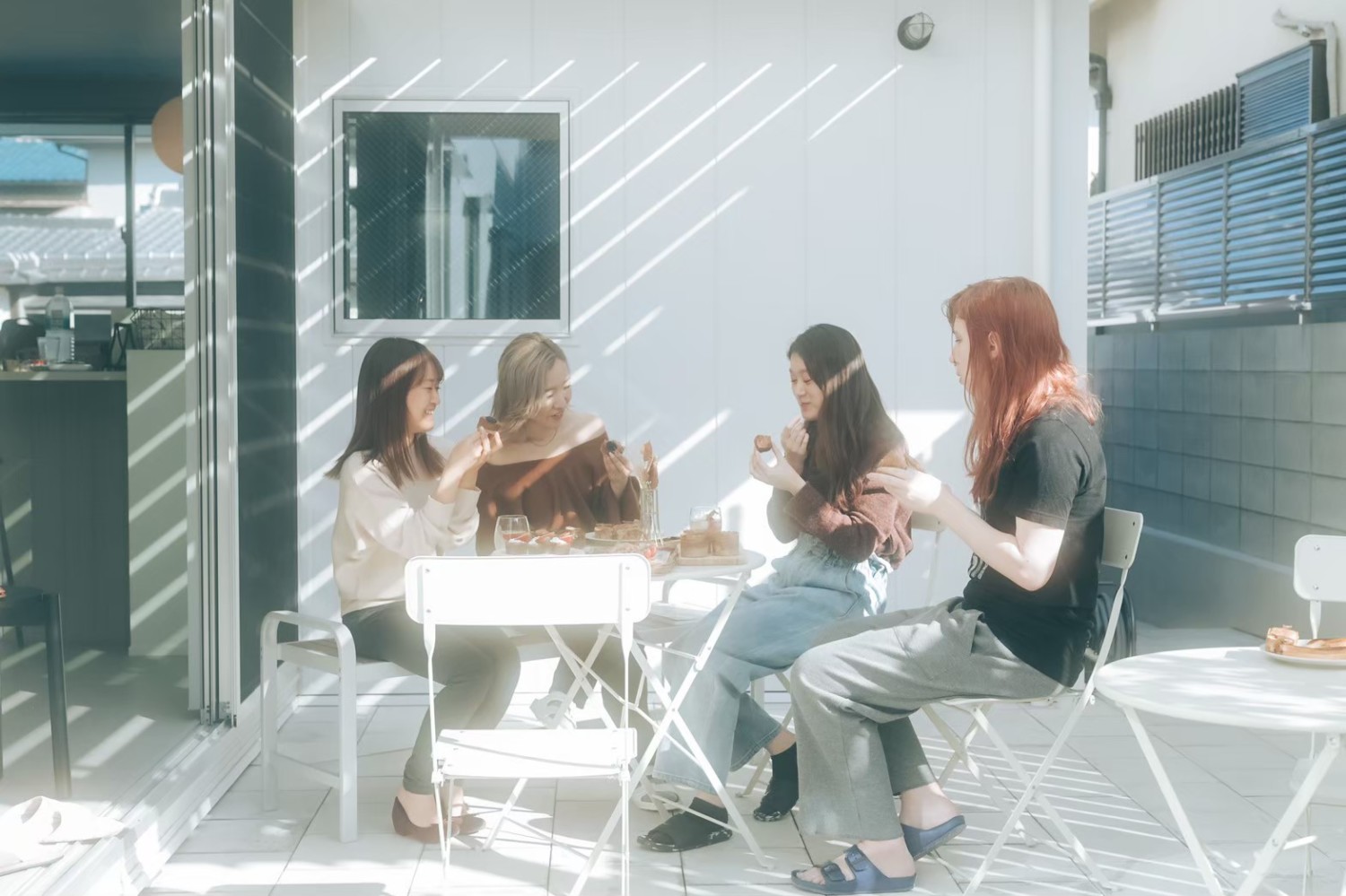 Located in a quiet residential area a short distance from the bustling area, HAYA OSAKA is popular among remote workers. There are a variety of shared spaces to choose from, depending on your mood of the day! 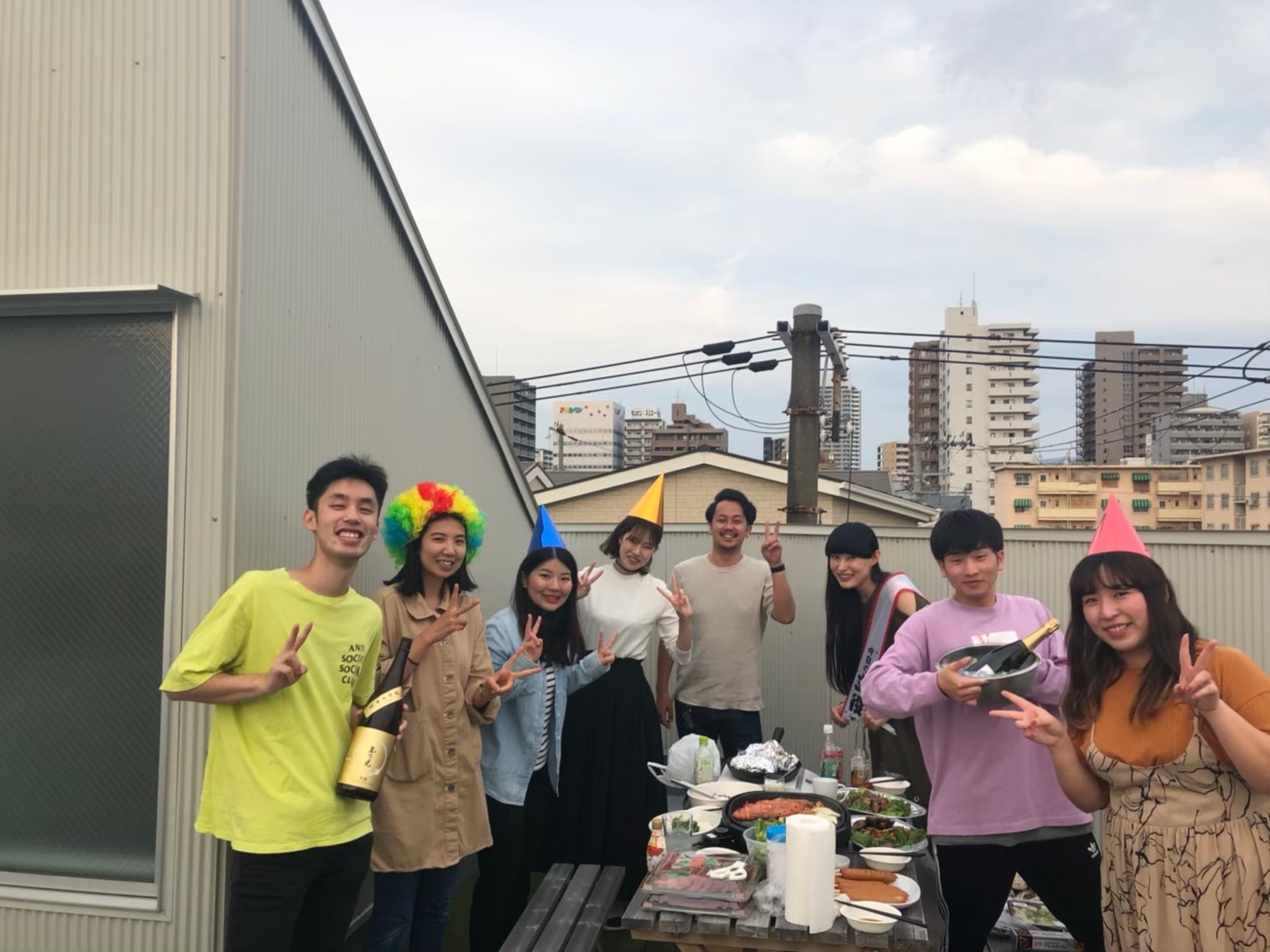 This is the smallest share house in TESEN. Even those who have never lived in a share house before can start living here as if it were an extension of living alone. It’s not often you’ll find a share house with a rooftop.

Since it will be the house you live in, facilities are of course important, but personally, I think it is more about “who you live with” than “where you live”.

For those who are transferring or changing jobs and coming to a place where they have no acquaintances or friends at all, I think the residents are a big factor. Such a share house is highly recommended for those relocating or changing jobs!

In this article, we’ve looked at some of the most frequently heard reasons for moving to a share house, such as “relocation” and “job change. I’m sure there are many of you out there with similar concerns and worries, but who knows, maybe there is a share house out there!

We hope that this will be of some help to those who are considering a new home, whether it be for a job transfer or a change in jobs. We hope you’ll give share housing a try!

There are a lot of people who choose to live in a share house because of a job transfer or change in jobs! I also moved from Nagano to Osaka for a new job and lived in a share house, and I’m really glad I did!